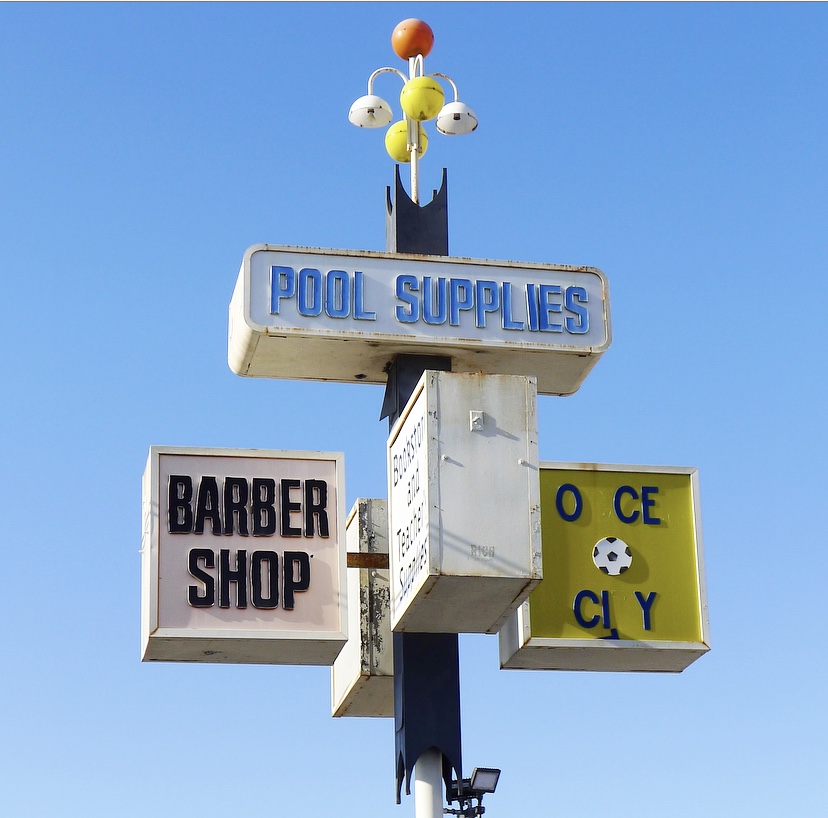 The Empress Hotel, opened 1961. It also featured on the single sleeve of Hungry Heart.

Asbury Park, New Jersey – a funny little place with all these links to Debbie Harry and Bruce Springsteen and Patti Smith and The Ramones but it’s pretty much just a boardwalk and some boarded-up 60s concrete that hopefully – if it’s lucky – won’t get forgotten about during the renovations. Of course the old Victoriana stuff gets looked after first – that and the Edwardian side-show stuff.

Asbury Park, New Jersey. Whilst I was there I spoke to an acid-taking cyclist who told me how beautiful some ribbons were. There were a lot of fat guys in too-tight T-shirt’s wearing flip-flops walking little dogs with their wives.

Still signs, but this time, from Penang, Malaysia!

Not because I’ve given up on signs from the USA but because I’m pig-sick of not being able to travel anymore (aren’t we all) and instead of being first-world-problems whiny I’ll just sadly wallow in melancholy whilst flicking through old photos from my past life.

Penang is a terrific place – utterly unique, has a 1930s Opium-den-vibe to it. I wrote a piece at the time – Passport Run: Thailand to Penang

Nope, I have no clue what the signs say either, apart from the first and the last one, obvs. 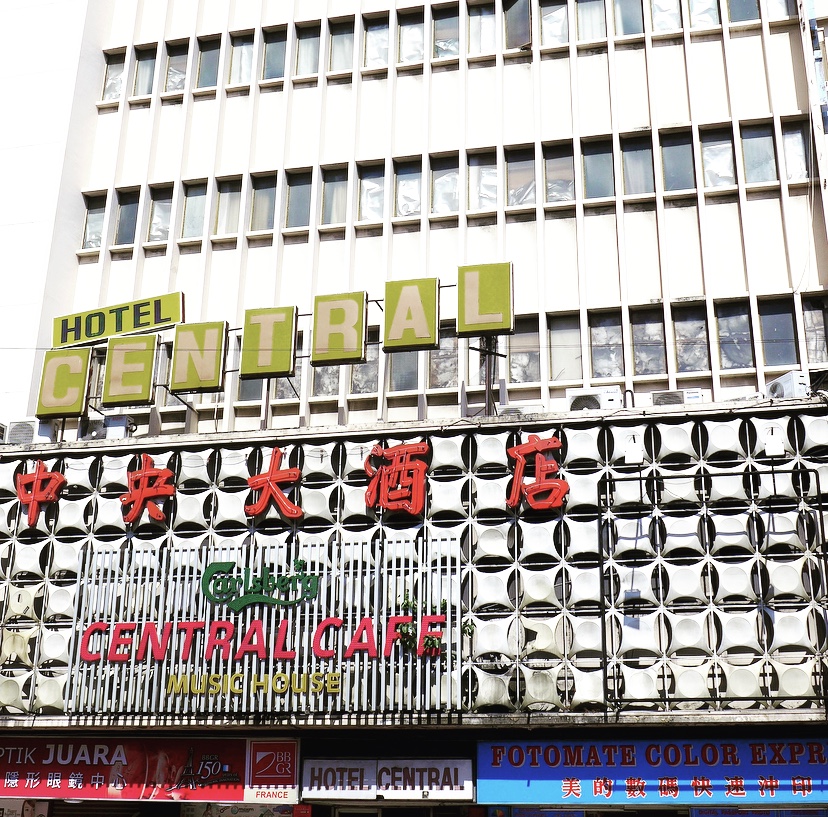 THE BEST IN TOWN | What the hell Louis III has got to do with a Burgers drive-thru (sic) is something none of us will probably ever know. Least of all Louis III who died long before the Burger was invented.

BELLFLOWER BAGELS | As featured in my ‘Way to San Jose’ piece in the latest issue of @modernistmag | JOURNEY.

…’There is the mandatory conversion of everything into a ‘drive-thru’ (sic) including a drive-thru Jesus followed by coffee and a bagel’…from Way to San Jose piece.

COCO’S BAKERY RESTAURANT x 3 | Founded in CA in 1948 – business expanded in 1960 and then formalised into a ‘proper’ brand in 1965 and, by the looks of it, never changed its branding again. GOOD. Let’s not overlook that smashing concrete bin.

CHAR-BROILED HAMBURGERS | What the f does Char-Broiled mean? To us British people that’s one of life’s greatest mysteries is that. 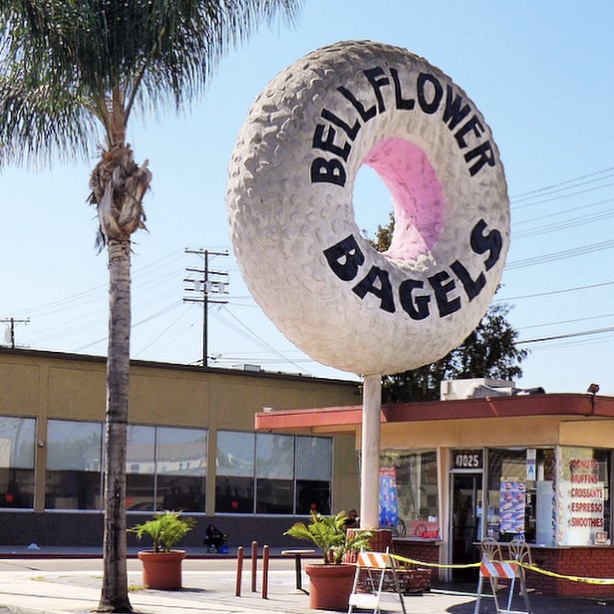 The original of this Honky Tonk bar was built in 1952 but it had to move back to make way for the new lnterstate-40 which was to replace Route 66.

Although it didn’t officially exist anymore the original road was renamed ‘Historic Route 66’ which is where Molly’s Bar & Lounge now sits.

….’Time has lost meaning, the usual day-to-day punctuation is absent and habits loosely associated with day and night are abstract:  Breakfast is served all day; the beer is always cold, rooms are by the hour and conflicting signs often sit right next to each other. ‘Molly’s Bar & Lounge’ – ‘Breakfast Anytime’….from Way to San Jose piece

MONROE’S MEXICAN FOOD | 1962 / 1975 The Monroe is Monroe Sorenson (not Marilyn). The earlier location was Rio Grande & Mountain but was demolished for a hotel and relocated to Loma Blvd – did they take this sign with them or was it new at the time? Dunno. 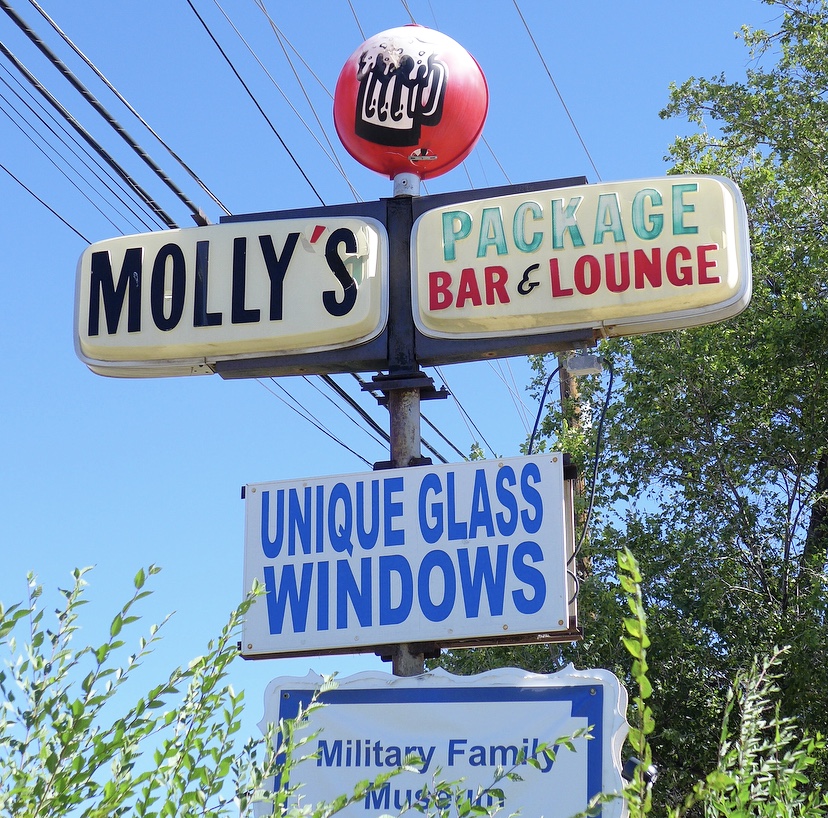 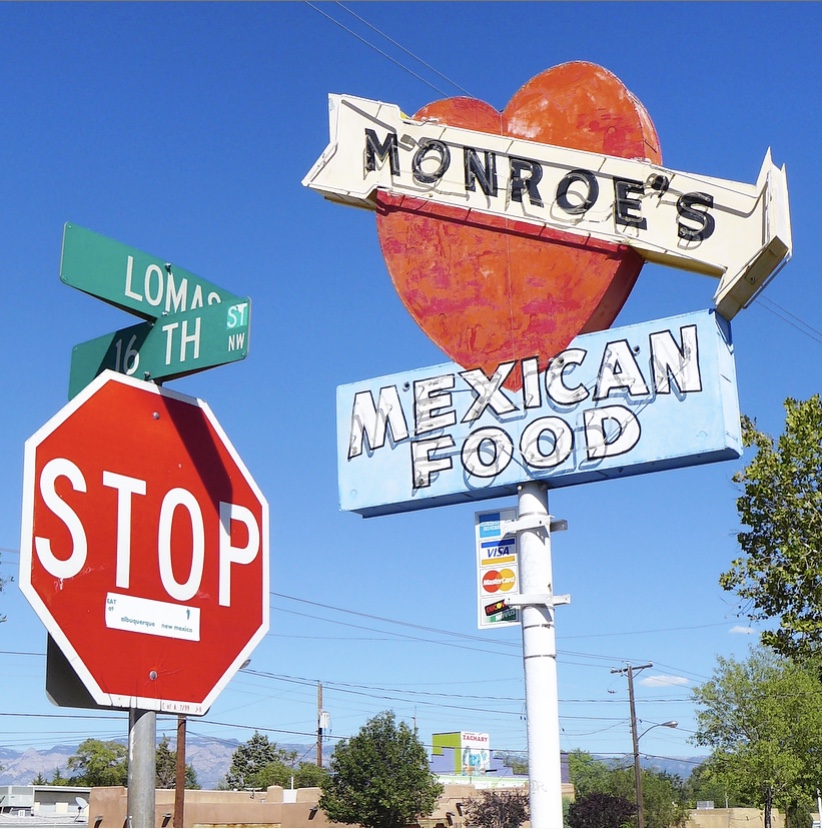 MARISCOS FAMILY RESTAURANT | ‘Familia and good food’ is all it says about this place on its website – but what else do you need to know? ‘Nowt. I have no idea what the food is like though, I didn’t eat there. It was all about the sign for me.

$1 CAR WASH | Boarded-up and unloved, this ex-car wash is bound to be gawn by the time I get back to Long Beach. Hope someone nicks the signage before they bring in the bulldozers. I’d buy that for a dollar. (Where’s that from?!)

TRAVEL EAGLE INN | Those funny little lamps on top of the motel signs are common in Long Beach, CA. No idea why. In fact, funny lamps like that are common everywhere – not just on Motel signs. So too are those ACE ‘Color TV by RCA’ signs – how I want one

….’It was the kind of Motel you’d expect to find in a not-ending-well pulp fiction thriller about an American road trip circa. 1960’…. 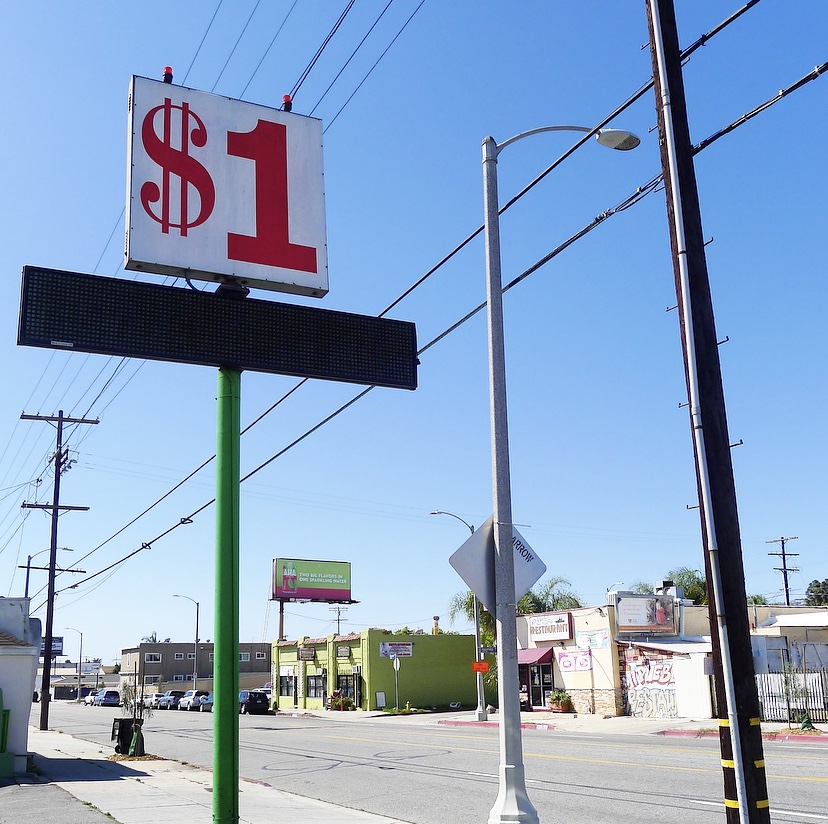 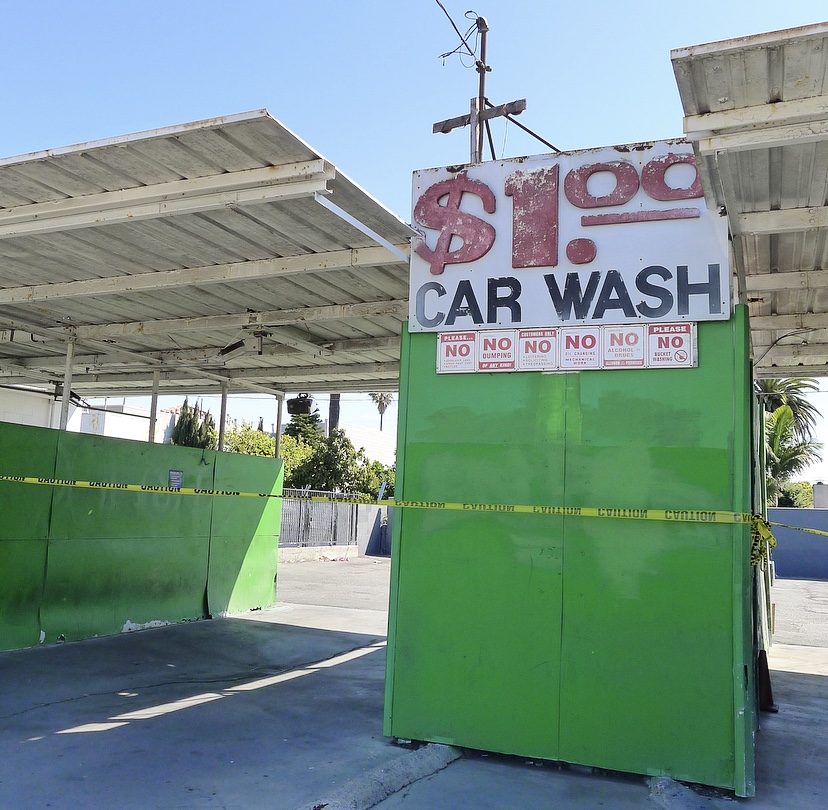 The Ford Factory in Detroit had been churning out new-fangled Model T’s since 1908.

Businesses along Route 66 prospered but the highway was removed from the US Highway system in 1985 and completely replaced by a new bypass: the Interstate Highway System.

Although it didn’t officially exist anymore the original roads were instead renamed ‘Historic Route 66’ a bit of which runs through New Mexico – which is where I picked it up.

The once prosperous businesses aren’t strictly ghost town but they do have a bit of that vibe and are definitely stuck in a kind of weird mid-80s preserved state.

Founded 1923. Featured the artwork of Native American artisans. The building is in the Pueblo Revival style by architect John Gaw Meem.

The murals are original and they depict Native American life, painted by Oliver Rush and several Pueblo and Navajo artists.

Appeared in an episode of Breaking Bad. Established 1940s – is the sign from then? Don’t know. Probably not.

Not so long ago I wrote a piece for @monopod about Motels, tbh I could bang on about them all day but here’s a couple of belters from the last month or so.

If I go full 80s Nikki Sixx it’ll be in some sleepy run-down American motel.

Fits the criteria, and my bank balance. (Which is nowhere near Mötley Crüe’s.)

The rather sad, faded glory of Angel Motel, deffo seen better days since it first opened in the 1930s. One of those places that suddenly found itself on top of a roaring freeway exit as the road system evolved around it. In this case, the 57 freeway exit in Orange.

I can’t find anything out about this one but these funny little lantern things on top of the sign are quite typical here. ⠀

These two are both Chicago – the Alamo shoe store sign is 1971 and features in the piece.

Established in 1916 by Polish immigrant Nathan Handwerker as a nickel hotdog stand on Coney Island.

‘…Each sign is more than the sum of its informative parts, offering something your Sat Nav will never point you in the direction of: nostalgia.

Signs for gas stations, car-washes, diners, truck-stops and motels – all characterising the look and feel of the particular state they’re obediently introducing…’

This latest crop of signage photos are all featured in my Way to San Jose piece in the latest issue of The Modernist #35 JOURNEY. It’s on sale now, via @modernistmag – link in their profile (not mine).

Sign is from 1977, other than that I can’t find out much more about it. 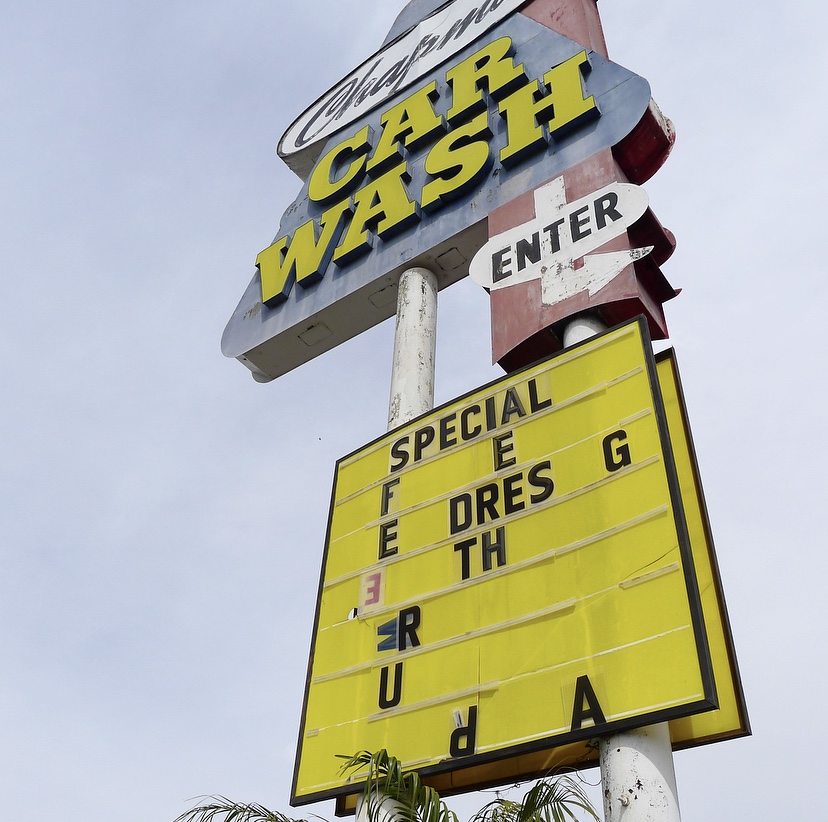 All just general signage from Orange and Long Beach. Got to be 60s and 70s? 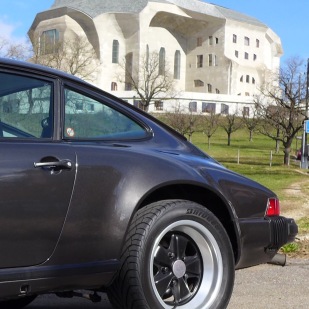 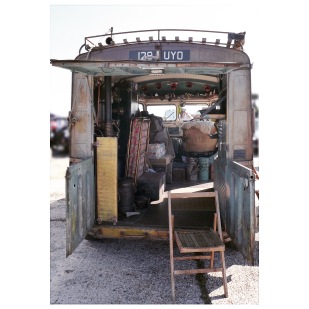